1 Corinthians: 13:12: For now we see through a glass, darkly; but then face to face: now I know in part; but then shall I know even as also I am known.

Scripture is taken from KJV and Revised Standard and edited to remove blasphemous names (Rev. 17:3), words and titles and to give a more Iybriy/Hebrew rooted understanding; edited also because the "Mother of Harlots" has inserted these names to cover up the names of YaHVeH/יהוה and HIS Ben Yahvshua/יהושׁוּע, and to counterfeit a Babylonian Greco-Roman "god", "lord" "Jesus" "Christ"…etc. and promote its demonic idolatrous pagan customs and "holidays" by replacing YaHVeH's Sabbaths (Dan. 7:25). 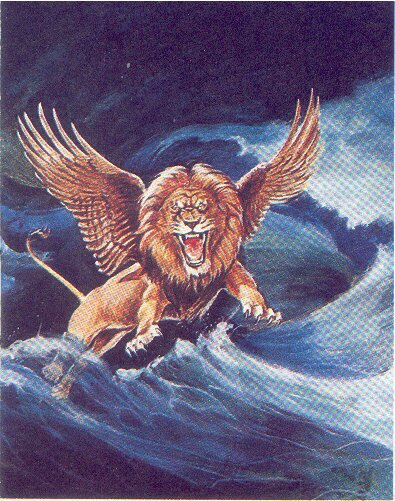 The Leopard = Graeco-Macedonian Empire, which sprang up about a year before the 390 years of the House of Yisrael’s captivity was complete.

The wolf = who? There is no description of the wolf in Daniel chapter 7 as one of the beast that devours the earth. Than, who are what is it? Unless we are missing a piece of scripture or there is a piece of scripture I have missed in my studies it is not made known by the scriptures I possess. Sense I don’t have anything else to go on with scripture I have to use what I already know about Rome. Now I know the dreadful beast of Daniel 7:7 is speaking of Rome and unless the Wolf represented the Assyrian Empire, which took the House of Yisrael into captivity, I know it's not referring to Ashshur/Assyria because that Empire has been destroyed, but the scriptures do point to Rome its death and resurrection (Rev. 13). What I do know about Rome is the Mythology of how it was formed, primarily by two boys raised by wolfs. I think most students of the scriptures have seen the statue of the she wolf suckling Romulus and Remus, unless somebody can fill me in on this matter, I believe the wolf represents Rome. 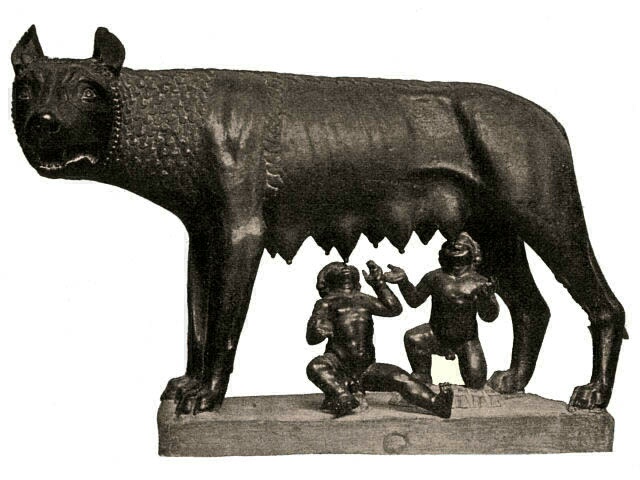 The 4th beast of Daniel chapter 7 should look more like an extreme and strange mutation of a wolf.
Page 7
The Prodigal Ben:
Scripture is taken from the King James Version; but will be noted if another version is used; and edited to remove the blasphemous names, titles and words that have been inserted into YaHVeH’s written Word to cover up, hide and or caused people to profess blasphemous, Satanic pagan idols in place of YaHVeH and Yahshua's/Yahvsha`s names!
The parable of the “Prodigal Son” as the KJV calls it has been weighing on my mind for a while now, because I believe YaHVeH’s Ruach has been leading me to look deeper into the hidden meaning of this story.
The parable can be found in Luke: 15:11 – 32;  the parable is about a man who had two benniym and the younger ben wanted his inheritance right now, instead of waiting for it until he was older and wiser or even before his father had passed away.
Now it is imperative for you to understand this one main point about this parable, the younger ben is receiving his inheritance. An inheritance is something someone receives as a gift from someone else whether they are righteous or evil; it is at the discretion of the giver when the person awards it. It can be money, a house, land… etcetera… in most cases it’s a material gift. It is because of this material abundance inherited by Yoseph, which was passed down to his two benniym that they think they are pleasing YaHVeH. It is the deception of riches trap (1 Tim. 6:9) that the “many” (Mat. 24:5) have fallen into and think that their disobedient actions doesn’t matter to the Elohiym of Yisrael and they are under a Graeco-Roman idol named “Grace” that causes all their unrighteous behavior to be acceptable; nothing could be farther from the truth.
Yahvshua the Messiyah said:
Luke/Ur: 15:11:  And He said, a certain man had two benniym:
Luke: 15:12:  And the younger of them said to his father, Father, give me the portion of possessions that belongs to me. And he divided to them his living.
Notice the ben that is requesting his inheritance is the “younger”. Remember that Ephrayim (B`reshiyth) was the younger and Menashsheh was the older, but in this case the older represents Yahvshua the Messiyah/Body of Yahshua (Eph. 2:20; Rom. 12:5), and Ephrayim represents the House of Yisrael/ten tribes.
Luke: 15:13: And not many days after the younger ben gathered all together, and took his journey into a far country, and there wasted his substance with riotous living.
Page 8
The far country is the British Isles/UK and North American continent/USA/Menashsheh, and the wasting of his substance with riotous living is the House of Yisrael’s investment in Christian/Baal/Sun god idolatrous worship and building their religion and economy on a Babylonian Graeco-Roman motivated educational system (public schools, colleges and universities) that manipulates how people buy and sell (Rev. 13:16-17).
Luke: 15:14:  And when he had spent all, there arose a mighty famine in that land; and he began to be in want.
This is the time (famine) the USA and the world is in now, which is the last seven years of the seventy years (Yirmiyah 25:12) that the “Jewish State” has been a nation. The USA is in trillions of dollars of debt, but continues to delude and deceive the “many” by printing out more and more money through the privately owned Federal Reserve (Ya’akob/James 5), which is the manipulator of the economy world wide, until the foreign nations get tired of it, which is culminated into what the book of Revelation/Raz Galah/Secrets Revealed calls the beast/EU with ten horns/ten Islamic nations.
Luke: 15:15:  And he went and joined himself to a citizen of that country; and he sent him into his fields to feed swine.

The joining himself to a citizen of that country symbolizes the subtle captivity the children of Yisrael have fallen into with a stranger of another country with a different governing system from what YaHVeH’s Torah teaches. The sending of the prodigal ben into the fields represents the House of Yisrael having no choice now (because they must be punished for disobedience), so they can feed themselves, but to work under hard burdensome labor under someone else`s authority.
Luke: 15:16:  And he lusted to have filled his belly with the husks that the swine did eat: and no man gave to him.
The lust to fill his belly the prodigal ben/House of Yisrael is feeling is coming from the terrible starvation that his captors have forced him in. Remember the Holocaust and what the Germans did to the House of Yudah; many of the images we have seen from documentaries show Yudiy men, women and children as walking skeletons; such a horrible sight to see. The prodigal ben has lived such an unclean life style for so long and he’s so disparate he’s willing to wallow with the pigs so he can eat their food.
Luke: 15:17:  And when he came to himself, he said, How many hired servants of my father's have bread enough and to spare, and I perish with hunger!
The House of Yisrael/prodigal ben is beginning to come to his/their senses; he is beginning to realize that the reason he was able to live such an abundant life was not due to his wisdom or might, but only because of his FATHER’s favor and his obedience to him that he had it made in the shade.
Page 9
Verses 18 threw 24 explains what happens when the prodigal ben`s punishment/“Great Tribulation” or “Ya’akob’s Trouble” is over, he repents and confesses his sins and he is then reconciled back to his FATHER.
Luke: 15:25:  Now his elder ben was in the field: and as he came
closer and closer to the house, he heard music and dancing.
The eldest ben represents the Body of Yahshua, those that have always been obedient to YaHVeH’s Torah and those that have repented of their sins, such as; obedient Leviyiym kohen-hood, the Nebiyiym, the twelve chosen Messengers/Limmudiym/Emissaries, obedient believers and above all Yahvshua the Messiyah the chief corner Stone. Don’t misunderstand, Yahvshua never disobeyed HIS FATHER, and there have been those who never stopped living according to the Torah, but now confess Yahvshua as YaHVeH’s Mashiyach. I don’t fall into that category; I didn’t begin to come into the knowledge of the truth until I was in my late twenties and even then was deceived by the blasphemous names, and didn’t repent of this until my late thirties to early forties. I`m sure most of us fall into this category. Praise YaHVeH for not judging us according to our sins but according to HIS kindness and compassion, HalleluYah!
Luke: 15:26:  And he called one of the servants, and asked what these things meant.
Luke: 15:27:   And he said to Him, your brother is here; and Your FATHER has killed the fatted calf, because HE has received him safe and sound.
Luke: 15:28:  And He was angry, and would not go in: therefore came his FATHER out, and entreated Him.
Luke: 15:29:   And He answering said to His FATHER, Look, all these years I served YOU, neither transgressed I at any time YOUR commandment: and yet YOU never gave Me a kid, that I might rejoice with My friends:
Luke: 15:30:   But as soon as this YOUR ben comes back, which has devoured YOUR living with harlots, YOU have killed for him the fatted calf.
Verse 30 is reference to the House of Yisrael’s going into idolatry; for example calling on names of blasphemy like “god, lord, Jesus, grace, hope, mercy...etc… and hiding their eyes from YaHVeH’s Sabbaths (Yechizkiyah:22:26; Dan. 7:25; Rev. 17) and replacing them with pagan seasons such as (Galatians: 4:10; Yirmiyah 10) ; New Years, Valentines Day, Easter, Saint Patrick’s Day, Ground Hog day, Aprils fools, Memorial Day, Labor Day, Presidents Day, Birthday’s, Halloween and the grand finally of them all Christmas!
Page 10
Luke: 15:31:   And HE said to Him, Ben, You are forever with ME, and all that I have is Yours.
Luke: 15:32:   It was correct that WE should rejoice, and be glad: for this Your brother was dead, and is alive again; and was lost, and is found.
Remember what Yahvshua told His twelve chosen limmudiym/taught ones:
Matith’Yah ha Leviy/Matthew: 10:6: But go rather to the lost sheep of the House of Yisrael.
Matith’Yah ha Leviy/Matthew: 15:24: But He answered and said, I am not sent but to the lost sheep of the House of Yisrael.
In conclusion remember no other nations match the description of B`reshiyth 49:22 – 26 but Great Britain and the United States of the America. These are the two nations that have received the material abundance and military power in these “last days”, in the time when the House of Yudah has become what is termed by the media as the “Jewish State”/Israeli’s.  By the way the modern Jewish State and its beginnings came about through the Balfour Declaration in 1917 by the British.
This commentary in no way implies that the modern day “Jewish State”, the United Kingdom or the United States are living in obedience to YaHVeH and HIS commandments through belief in HIS Ben Yahvshua; on the contrary, they are living in disobedience; because their religious beliefs are based on “Judaism” and “Christianity” (traditions and doctrines of men), YaHVeH is going to punish them through the “Great Tribulation”/ “Ya’akob’s Trouble”. It’s no coincidence that these nations have been allied together in these “last days”.

Message Board is down
0 comments